Why Are We So Thirsty?

3 Now the serpent was more crafty than any other beast of the field that the Lord God had made.

He said to the woman, “Did God actually say, ‘You shall not eat of any tree in the garden’?” 2 And the woman said to the serpent, “We may eat of the fruit of the trees in the garden, 3 but God said, ‘You shall not eat of the fruit of the tree that is in the midst of the garden, neither shall you touch it, lest you die.’” 4 But the serpent said to the woman, “You will not surely die. 5 For God knows that when you eat of it your eyes will be opened, and you will be like God, knowing good and evil.” 6 So when the woman saw that the tree was good for food, and that it was a delight to the eyes, and that the tree was to be desired to make one wise, she took of its fruit and ate, and she also gave some to her husband who was with her, and he ate. 7 Then the eyes of both were opened, and they knew that they were naked. And they sewed fig leaves together and made themselves loincloths.

for my people have committed two evils:
they have forsaken me,
the fountain of living waters,
and hewed out cisterns for themselves,
broken cisterns that can hold no water.

4 And he had to pass through Samaria. 5 So he came to a town of Samaria called Sychar, near the field that Jacob had given to his son Joseph. 6 Jacob's well was there; so Jesus, wearied as he was from his journey, was sitting beside the well. It was about the sixth hour.

7 A woman from Samaria came to draw water. Jesus said to her, “Give me a drink.” 8 (For his disciples had gone away into the city to buy food.) 9 The Samaritan woman said to him, “How is it that you, a Jew, ask for a drink from me, a woman of Samaria?” (For Jews have no dealings with Samaritans.) 10 Jesus answered her, “If you knew the gift of God, and who it is that is saying to you, ‘Give me a drink,’ you would have asked him, and he would have given you living water.” 11 The woman said to him, “Sir, you have nothing to draw water with, and the well is deep. Where do you get that living water? 12 Are you greater than our father Jacob? He gave us the well and drank from it himself, as did his sons and his livestock.” 13 Jesus said to her, “Everyone who drinks of this water will be thirsty again, 14 but whoever drinks of the water that I will give him will never be thirsty again. The water that I will give him will become in him a spring of water welling up to eternal life.” 15 The woman said to him, “Sir, give me this water, so that I will not be thirsty or have to come here to draw water.” 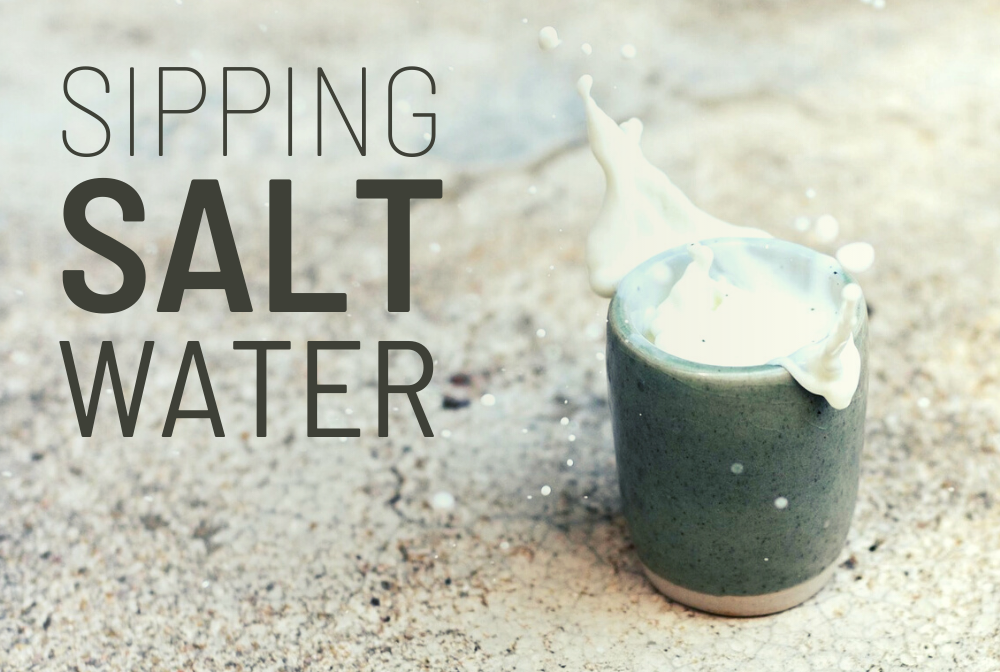 The Salt Water of Busyness

The Salt Water of Comfort

The Salt Water of Control